I know I’m not alone in celebrating the passing of 2013. It was a rough year, as careful readers of Dirt Girl know. Let’s recap:

1.     My daughter’s illness last January.
2.     The death of my beautiful Rottie girl, Chloe.
3.     The passing of the great John Stoecker – a terrible loss to my circle of friends.
4.     Losing my longtime job (they immediately rehired me as  “temp” with no benefits. Classy.)
5.     Giant August storm = four feet of water in the basement. Again.
6.     Al’s emergency gallbladder surgery – a bill our new, crappy health insurance is disputing because we went to the “wrong hospital.”
7.     My detecting skills seem to have crawled under a rock.

That’s right.  I’m just not finding anything lately. I tried SO HARD to dig something memorable or at least vaguely interesting so as to have a scintillating end-of-year Dirt Girl recap for ya.

The past few weekends, Cheryl and I have been trolling construction sites as more and more ancient farmland south of town is carved into curlicued streets dotted with vaguely chateau-like houses for the moneyed many and their granite countertops.

Our favorite blue-eyed foreman had told us about a barn they’d recently torn down and we set out to find it. After a massive directional misunderstanding sent us nearly to the Florida panhandle – on foot – we turned around and found the barn, right next to our cars.

And not far from the barn, in deep woods, after crossing a sweet little stream, I came upon this:

I yelled to Cheryl and we got to work. Our own secret home site!!!!

We’ve spent three days there and don’t have a lot to show for it. Part of the problem is the EVIL THORNS.

There was one point where three thorns were stuck into the tender back of my left hand, pulling the skin into pointy little pyramids. “Oh,” a part of my brain thought, “I should get a picture of this, since I’m certainly not digging anything worth photographing.”

But then, the pain was too great and I abandoned the plan. Also, a large amount of my hair was being pulled out by other thorns. Instead, here's a vid of the site. Note the beautiful fireplace. Bulldozers were just on the other side of a piece of plastic.

We did come across a tiny, old cemetery, abandoned, its stones toppled and broken. (We plan to go back and do some clean up and try to get all the names.) It's a bit of a mystery. The cemetery is very close to the remains of the house. As in too close.

Here are some of our finds. Not very impressive. Lots of iron, lots of junk. Lots of thorns. 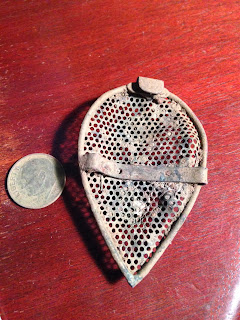 Oh! I almost forgot! My buddy, Tom, from the Middle Tennessee Metal Detecting Club, very kindly took one of my old ax heads and did electrolysis on it!

By "electrolysis,", I do not mean that Tom removed unwanted hair from the ax head. This is an example of a really unfortunate synonym. In MD parlance, “electrolysis” is a process involving  a battery charger, baking soda, water and various wires to remove rust from nasty, crusty items. Tom did a swell job and I am in the process of learning how to do it myself. I have almost everything ready to start, including an embarrassingly large pile of rusty nonsense outside my back door.

A few days ago, thoroughly grumpy due to my bad luck of late, I spent a cold and lonely day driving all over the Nashville metro area looking for places to dig. Al had given me a new Garrett pinpointer to replace the one I lost last Christmas and I needed to practice not losing it. Found a house being renovated and the guy in charge said I could dig. Here's the result: 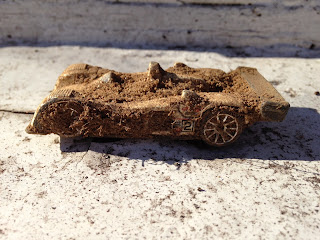 Yesterday, the first day of 2014, was sunny and warm. Cheryl and I decided to take a break from wilderness. We headed to a park on the other side of town. A few months ago, I’d found a Civil War button right by the street.

Here's my take from the park:

Later, I was nosing around the edge of a nearby schoolyard when a man approached. Would I like to detect his back yard? Why, yes!

And that was how Cheryl and I ended the first day of the new year: digging with some adorable children (one named WHIT!) in a really cool old neighborhood. Hopefully, this contact will lead to more permissions.

So, here we are at the start of a new year.  The last one was challenging, but loveliness emerged from it too. My daughter is fine and strong. I had a houseful of family for Christmas. Chloe is flying free, safe in the arms of eternity; neighbor she attacked greets us cheerfully and says he rarely thinks about what happened. My job? Well, I haven’t made peace with that. We’re going to wall off the basement doors so it never floods again. Al’s all healed up, and the songs of John Stoecker remind his friends to “Enjoy the Ride.”

Speaking of songs, I'm working on a record of metal detecting songs. Here's one. I dug it up.