If you’re checking in to see if I still like metal detecting, I do. I’ve been at it for 15 months and while I do not feel quite as enslaved by it as I did at the start – when, after a day of digging, I would feel kind of sick, as if having eaten too many eclairs – I am still very, very interested in doing it every chance I get.
In the last two weeks, my busy schedule (day job as a writer for a medical school, part time job teaching dance to sweet little children, walker of dogs, cooker of meals, marketer of Not About Madonna, and – oh, yeah – writer of songs) has made it hard to find time to get out there. But you know, give me 20 minutes at the end of a crazy day and I can dig the crap out of some dirt and come home with some history in my pocket.
First of all: my own yard continues to amaze. I’ve dug it countless times, but I’ve been revisiting it with my new Tesoro DeLeon and pulling out all kinds of new stuff.  One day about two weeks ago, a quick dusk hunt in the front yard yielded this.
Isn’t that cute?
And then there’s the back yard. When I bought my first machine in January of 2011, the first place I went was the back yard and I immediately found a Civil War-era musket ball and not long after, a minie ball. But that was it, relic-wise. Until that evening two weeks ago. I stuck the ladybug in my pocket and went around back and – bing, bing, bing – found three more CW bullets (one of them quite smashed) and a more modern bullet.
Was there a camp here? A skirmish?
Here’s one “moment of discovery” for ya.
Another day, on my lunch break (I work from home) I went across the street to my neighbor’s huge yard that I have likewise hunted many times. Pulled this out! 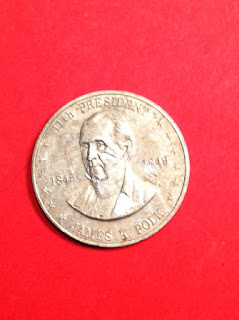 Was very excited, until I turned it over. 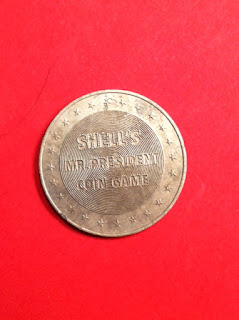 Made me laugh and think about the ‘60s and how, if we’d had a car I would have LOVED to collect all the Shell Mr. President Coin Game tokens. I like how all this stuff is all jumbled up in the dirt. Civil War bullets, ‘60s Shell tokens, ladybugs, pennies. The land is like a big Christmas fruitcake. And I love me a good fruitcake, any time of year.
Last Sunday, Doug and Brenda drove me and Cheryl to a field about an hour east of Nashville. Do you want me to tell you where? I won’t do it.  I won’t tell. I will tell you though, that as we drove there, I thought about how badly I wanted to find a cool coin. I have NEVER found anything more interesting than a wheat penny. So, I put that out there.
We parked under a tree and climbed over a fence. (Yes, we had permission.) It was easy hunting, as the field had been plowed recently.  Doug believed there had been homesteads here, back in the 1700s and the bits of colored crockery and the old, rusty nails we found supported that.
Then I dug this! 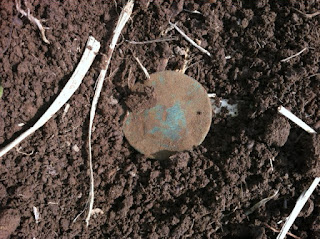 Doug thought it was a Large Cent – a common penny in the early 1800s. When I got home, though, I took a picture and posted it on a numismatist forum. They were so helpful! At first, they said it was a farthing, but the final diagnosis is that it is a George III Half Pence. This would date it between 1770 and 1775. Here it is up close.
Strangely, the flip side has been kind of defaced. Weird.
So I guess it must have come over on a ship, then made its way, from homespun pocket to homespun pocket, to a field in Tennessee.  That night, I took the half pence to a festive dinner party. It had fun.
Today, (Easter Sunday), Doug and Cheryl and I went back to that field. On the way, we got into a minefield of a conversation about various historical and social issues. Voices were raised and spit (mine) was flying (only a little) and heart rates (mine) were raised (quite a lot). I didn’t like it much; I don’t like conflict. But I thought of it as a wonderful opportunity for the exchange of ideas, even if you can never, in a million years, agree with some of those you receive in trade. I really, really, REALLY like and respect the people I go out digging with. The fact that we have some profound differences in the way we see the world might make me uncomfortable, but it’s the price – and privilege – of living in a country where all kinds of people live together and interact every day. We're like that line in my favorite Brad Paisley song: "It's like we're all livin' in a big ol' cup... just fire up the blender and mix it all up..."
When we got to the field, I didn’t do nearly as well as last week. Doug skunked us both, pulling out a veritable museum display case of colonial-era thingies, including a silver thimble and what I think will turn out to be another half pence coin. I found three partial horseshoes (now soaking in a jar in my bathroom… why? I have no idea), an old, G-shaped iron hook, a thing that Doug says is part of an colonial-era, two-pronged fork, a metal tab off a strap from when the field was used for maneuvers during World War II, and my very first Native American arrowhead. Also a couple of flattened beer cans. Of course.
Hot and tired, we headed back to the car whereupon Doug drove us around to various enticing historic sites where we did not have permission to dig, and to a couple where we did have permission, but no one was home. We stopped on a bridge and the three of us looked down into a copper-colored river. There, in the sun were fish, hundreds of them, all facing the same way. I don’t know my fish, but Doug and Cheryl saw bream, catfish, bass and something called “suckers” that I really don’t hope to have any direct contact with.  Funny thing was, all these different fish were floating together, facing in the same direction. Like they were listening to a speech or a sermon – it was Easter Sunday, after all. Maybe they were focusing on their similarities. I don't know what they were up to, but it was surprisingly ... organized.
Last stop was Bledsoe’s Station – a colonial-era fort which Doug and Brenda discovered in a farmer’s field 30 years ago. Now it’s a protected historical park. As we drove in, this is what we saw: 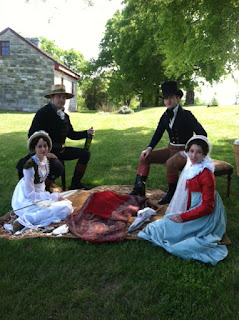 OK. That was surreal. We went over for a chat. These four picnickers were members of the Regency Society (“a group for Ladies and Gentlemen that is dedicated to remembering and preserving the history, culture and costume of the 1790-1820 time period.”) They very kindly allowed me to take their photograph even though I was quite obviously wrecking their lovingly crafted time machine ju-ju by hurtling towards them with my IPhone. Turns out two of them were from Michigan! My enthusiastic “Go BLUE!” was met with polite nods (these were lords and ladies of the Spartan variety).
And will you look at this! Here’s their blog about that very same outing.
http://rsatn.blogspot.com/
Once again, the mingling of history.
Finally, a tangent, filmed in the field where Indians hunted, pioneers chopped wood, WWII soldiers practiced before heading off to war and tractor drivers drank Budweiser just a year or so ago. So much of metal detecting is the hunt, the history rush, the holding of the ancientness. But just as much are moments like this:
Posted by whit hill at 11:11 PM 1 comment: