I’m just going to come right out and admit it. You skunked me.

I shall even hazard to say that this weekend’s skunking of me, your friend Whitley, may herefore be referred to as the Skunking of the Ages, a skunking by which all other future skunkings will be measured.

(As this isn't, of course, actually a letter, but a blog post, I’ll recap a bit for the clamoring public.)

First, this weekend was the most beautiful in many weeks, with morning temperatures in the 50s and reasonable highs. Overhead: the bluest of skies, dotted with wispy wisps. Cool breezes. It was prime for digging and, Cheryl, you know as well as I do how badly we both needed this weekend. Our MD mentor, The Aptly Named Doug, had scouted out a construction site in the small town of “Borgnorf”, a few miles northsouthwest of Nashville. Between a marshmallow factory and a pelican ranch.

(Sorry, folks: Cheryl and I will never tell you where.)

It was going to be so FUN.

As I left the studio, Cheryl, you called me with excitement in your voice.

You’d found your first US buckle. You texted me a photo of it and it’s indeed a beauty! I was so happy for you! I really was. Later, I told a friend how cool it is that when one of us finds something, the other one is really, truly happy. There is never jealousy.  Never.

I will say, however, that your buckle did quicken my pulse. Sunday could not come soon enough. Saturday evening, I became so desperate that I visited a neighbor’s yard and quickly pulled out these nifty 1950s-era house numbers. Pretty cool, huh, Cheryl?! 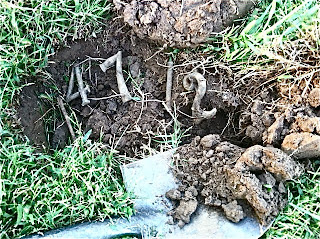 Which brings us to this morning, Sunday. We met at the site in Borgnorf. You were right, Cheryl: it’s HUGE. A massive, unfenced, unposted, drool-worthy construction site in a rugged and ancient area that will soon be peppered with subdivisions named “Briar Mount” or “Craggy Landing.” We pulled in and got started.

It was hard going. The bulldozers had turned the gentle fields and forests into the surface of the moon. We immediately split up and started swinging our twin Fisher F75s. I instinctively headed for the edge of the site – it was bordered by thick woods.  Here’s the first thing I found:

(It’s brass or copper with a nice, green patina, so I was pretty excited.)

but there were also tons of beer cans that spoke “assholes who litter.” I didn’t find anything else for a long time. I fell down twice. Found a harmonica reed just lying on top of the ground.

I kept looking at the woods. They were very enticing. I noticed one tree in particular that stood tall above the rest. An old timer that had surely sheltered soldiers in their camp…

And here, Cheryl, is where I must thank you for saving my life…  for when I pointed out that tree and told you I was going into the woods to check it out, you told me NOT to because rattlesnakes are at an all-time high in September and I believed you. And then, not THREE minutes later, we heard a huge, earth-shaking noise and a massive branch from that very same tree came crashing to the earth. For no reason.

Right where I would have been standing had you not warned me.

So thank you, Cheryl. Your kind warning makes what happened later a little easier to bear.

For you, Cheryl, had to go and turn up the skunk. First: a beautiful rosette that totally surpassed my – let’s-face-it – old lid of something.

Then you found another buckle. This time, with an eagle on it.

You have every right to dig multiple Civil War buckles. I support you!

But this was a little much, don’t you think? Two in one weekend? Really?

I became frenzied. I dug my little heart out. I wanted a buckle – or ANYTHING – so bad. I did manage to dig one plain, little flat button. I showed it to you, triumphant.

Then you showed me the numerous highly decorated flat buttons and military buttons you’d been digging all afternoon without fanfare and a little part of me died.

Finally, you were ready to call it quits. I agreed – it was so hot – But I found I could not give up! I got a weird signal and – zowee! – dug an ancient spoon. The scales were tipping.

Then, I got a GREAT signal and dropped to my knees, scrabbling in the dirt like a crab. You watched, pityingly, from your car.  “Go home!” I yelled across the acres of bulldozed earth, but you would not leave me there alone. Instead, you joined me and helped me dig. And when I pulled it out and screamed, “FUCK it’s a GAS CAP!” you turned it over and showed me that it was actually an old oil lamp and assured me that it was cool.

You are a good friend.

And so, I am happy for you and your buckles. You deserve them. And, after I find some of my own, I hope you find many more.

Here are my finds of the day.

I broke the spoon.