After all the national meanderings of the fall, your Dirt Girl decided to stay put throughout the holiday season and build herself a fluffy, little nest of vintage pull tabs. But in the process, she got lost in the woods, covered with mud, impaled on thorny branches, froze her fingers and toes and found a veritable boatload of interesting items. She did not encounter one mosquito and had a very merry Christmas.

Dirt Girl will now stop referring to herself in the third person.

Winter is prime time for MDers here in middle Tennessee. It’s cold, but the ground rarely freezes. The snakes are snoozing and the bugs are, I don’t know… larval or something. The only downside is the sunlight, which in Nashville gets shut off at about 4:15 p.m. Due to my dayjob-for-which-I-am-thankful, that leaves only weekends for serious digging but I had the entire week between Christmas and New Year’s off and made good use of it. Here are the highlights. I’ll never remember it all.

First, an update: Some time in November, in the back of a house on Fatherland Street, I dug a really old button, but didn’t know what it was. It reads “WG” plus some words on the back that are pretty hard to read.

Showed it to The Aptly Named Doug, and he got out his button book.
Here he is looking it up in his amazing basement lair of antiquity. 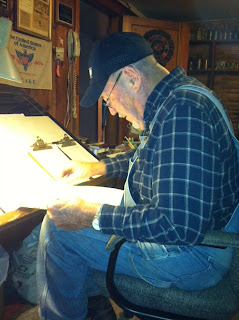 Turns out it’s a Civil War button from a Philadelphia company called the Washington Grays. The script on the back says “Horstmann/Phila & New York”.

There’s nothing quite as silent as our house on Christmas morning, now that our kids are all grown to functional, friendly adults with their own lives. It’s sad, a little, but not too bad. Al and I had a lovely gift exchange. I got a GARRETT PINPOINTER!!!

I made a frittata, then got that too-cheery tone to my voice and said I’d be going out for a little bit. Headed over to a friend’s house that backs up to some woods that kind of feed into Shelby Park.

Spent several hours in very thick woods/brush on a steep hill. Some trash, but not too bad and I’m really learning to trust the Fisher F75 and not dig the junky sounds.

Had this little overly dramatic moment.

(See, 'cause maybe it wasn't a soldier. Could have been anyone. But I'm thinking soldier. Playin' a sad song.)

Just a few minutes later, I got a solid signal that read 95 over and over, every time I swung – no trashy sounds, no erratic numbers. Thought for sure I’d hit my first CW-era buckle but dug this instead.

Doug sez it’s part of a grandfather clock.  I’m not convinced. Whatever it is, I like its grace.

I was surprised to not find any definitive CW stuff. I’m also really glad no one was there to see me get completely immobilized by a large thorn bush. I’m not even sure my feet were on the ground at one point. I had my IPhone, but there’s no app for that.

By the middle of the holiday break, I’d pretty much exhausted my meager stash of permissions and was grumping around the house on a bright and pretty morning wondering WHERE I was going to dig when I remembered that my friend Woody lives in an old house in Franklin and he’s super nice and ALWAYS on facebook. So, zip-zap… msged him and had permission to dig within minutes. It was Meant To Be!

Oh it was fun. Just … so fun. Woody lives in an adorable 1930s-era bungalow pretty much in the thick of where the Battle of Franklin took place. He showed me around and told me to have at it. I started in the very back of the back yard, up against a fence and immediately dug a pristine, dropped (as opposed to fired) 69 bullet.

Then came the nicest General Service button I’ve ever found. Can’t believe how much gold is left on it. 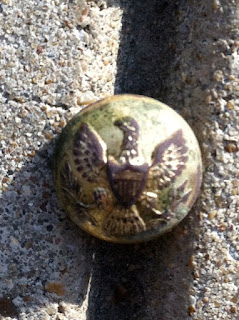 As I moved into the center of the yard, the digging got harder; it was full of bottle caps and what I think were the soft, silvery metal tops of milk bottles. After a while, I got familiar enough with those signals to just stop digging them.

Here’s  what I pulled out over two days (Believe me: I went back the following weekend).

Biggest coup of the winter thus far has been permission to explore a very special yard on Brush Hill Road, near my home. There’s a reason for my excitement: this property is probably very close to the lost town of Haysborough, which was a thriving little village in the late 1700s into the mid-1800s (?). It had a meeting house, a school, a store, etc. and was considered a rival to Nashville (then called Nashboro). But the town died away and – seriously – no one knows exactly where it stood. Doug has been obsessed with it for years – and others too; I’m definitely late to the party. And who am I to poking about in this past, anyway? I’ve only lived here five years, and I’m a Yankee to boot (sort of; this is arguable, at some other time).

But getting permission to hunt this 2.5 acre lot high above the Cumberland was a thrill. I packed my high hopes and set out one weekend afternoon. As I always do, I brought along my extra machines and spades and it was a good thing as there were some adorable, intelligent and very well-mannered children there who wanted to play. I got them started and together we immediately found a musket ball and some old pennies. (What a great way this is to teach history to children.)

Then, off by myself, on a little path that ran along the bluff, I dug something that looked like the shiny, flat part of a pulltab – or maybe a piece of play money. I tucked it in the pouch and didn’t think much of it. Later, in another part of the field, I dug something entirely unexpected. That was pretty much it, except for the usual junk. Here’s the day’s haul:

Reales were a fascinating form of currency that were minted and traded all over the world for many centuries. Here's a good article:

Is the coin a sign of Old Haysborough? Who knows. I’ll explore this property again. I suspect it’s been graded with a bulldozer at some point but I’m not giving up yet.

One random find: on a frigid weekday afternoon after a very full day of writing for my job, I HAD to get outside and ambled down the street my neighbor’s house where I dug the dog tag for “Babe” last year. Pulled this out within a few minutes and went home, frozen but happy.

And then there was the day 18th-century China, a Civil War soldier and a 1960s cowboy all collided on a gentle, wooded hillside in Nashville. I won’t tell you where. But within 20 feet of each other I found these. 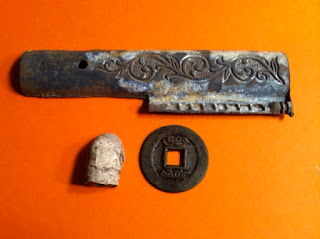 Curious about the coin, I posted on CoinTalk – an excellent resource.
Here’s what I learned.

I love those guys!

The long thing? I posted it on FB and someone who collects toys recognized it as half of a barrel from a 1964 Hubley cap gun.

The bullet is sliced perfectly in half. Why? I have no idea. Doug says they did that sometimes. Just because they could.

Again, the scrambling of history. I don’t know why it’s so moving to me. They’re things. Things don’t care. (I tell myself this, but I’m not ever totally sure about it. Maybe “care” is the wrong word. I do think that things can hold energy – heck, things ARE energy.) But more than that, I guess, it’s the awareness of the people, and their hands, the hands that held these things, then dropped them. Or buried them. And I love how I can dig them out of the ground with my hands. I love how these sweet items arrive in my life, like random people walking into a café, unaware of how beautiful they are and how one informs the other, just by proximity.