When I’m not metal detecting, I’m writing songs. Or maybe it’s the other way around; I no longer know for sure.  That said, this Dirt Girl post is going to incorporate a bit of both. You will read it and you will like it.

On a glorious weekend in late October, I woke up anxious to dig – knowing that it was my last chance before a two-week stint of performing in Michigan and Texas. Cheryl and The Aptly Named Doug had gotten up at the butt crack of dawn to go hunt some place fun and historic but I begged off in favor of normal slumber. I got on the road around 11 and arrived at my destination – a farm Cheryl and I had permission to hunt – about an hour later.

OK, stop. I can see you all now, in my mind’s eye, taking your map of Nashville and drawing a circle around the city, 60 miles from the center. That won’t work. I will reveal that there was a CW battle here, but other details – such as the fact that the site is adjacent to both a wig factory and an emu farm – may be erroneous.

I knocked on the door of the farmhouse, but no one was home so I left a note and drove around back of the barn and parked. Acres of green lay before me, the winter grass short enough for easy metal detecting.

I was nervous at first – I felt like a target, completely out in the open – but after a while I got in the zone and relaxed into the beauty and the free-flowing serotonin.

Here was my first real find of the day.

And, as it happened, it was my only real find. For not only is this site adjacent to a nail polish boutique and a peach pie store, but it has been well picked over by detectorists for many years.

I did notice that for the three hours I was there, a group of hawks circled lazily over my head. It occurred to me that from above I might resemble a small, dying elephant, swinging its emaciated trunk back and forth.  Sorry hawks. Move along. Nothing to see.

On Thursday, November 1, I flew to Detroit. MJ Bishop met me at DTW and we drove up to Harbor Springs for Lamb’s Retreat – a renowned songwriter retreat where I was asked to give a presentation and perform alongside some rather illustrious singer/songwriters.

Best moment of all, though, was taking a solitary trek down to my beautiful Lake Michigan and lying in the cold, wet sand in my coat and boots.

I lay there for a long time, listening to the lapping of the waves and wishing mightily for a metal detector. As if on cue, a man walked by and told me that just a year before, a sword from the War of 1812 had washed up on the shore right where I was sitting. This is true and not just the fevered dream of a songwriter minus detector lying in sand.

After a quick husband-kissing day back in Nashville, I departed for Texas where I joined up with Kerrville New Folk tour (see the Dirt Girl Does Texas post if you’re coming into this cold.) Landed in Austin where I found that Dollar had a cheapo special on massive, white Town and Country minivans. Obtained one and drove out to Hunt, Texas. Met up with some of the other New Folk winners – Alicia McGovern, Korby Lenker and The Sea The Sea (Chuck Costa and Mira Stanley) – at a Disney-esque Mexican restaurant. (Many thanks to Thomas Chapmond and Jeff Gavin of Cabin 10 for the check-grabbing!) Then out to the Roddy Tree Ranch where we were staying and performing.

Wow. Swanky comfort! We had a huge and well-appointed but TV-less house to relax in but not for long. I had time for a quick stretch before we grabbed our guitars and headed down to the open-air stage to play. Nicolette Good joined us from San Antonio. (Fellow NFer Edie Carey stayed home in Boston with her handsome baby boy.)

It was a beautiful, gentle evening that got starrier and starrier as we played. It was the first of many times that week that I just felt so honored to be onstage with these people. Really great musicians and amazing, layered, cool songs. Like … I dunno… Mallomars. Cayenne-infused Mallomars spiked with whiskey.

After the show we went back to our luxury pad and attempted to learn the results of the presidential election via our phones, ESP, star-gazing, shouting to distant mountain ranges, guessing, etc. When we learned the result, there was… an audible expression of emotion. (If you are unsure of my political leaning, considering that I spend a lot of time digging Civil War relics, consider, too, that I am a folk singer.)

The next morning, Alicia and I drove back to Austin after stopping for lunch and antiques in Johnson "City".  After resting up in the domestic comfort of the Chapmonds’ lovely home, and throwing the ball for a sweet, galumphing  Labradoodle, we headed to JAX – a great restaurant/bar near UT Austin. Again, we were wined and dined, this time courtesy a folk music-loving pathologist named Phil Collins – a series of descriptors I couldn’t make up if I tried. (Thanks for the veggie burger, Phil!) Alicia, Korby, Chuck and Mira and I played for hours. It was all made more delightful by the presence of Dana Falconberry – one my long-ago dance students from the Milligan School of Ballet, now all grown up to be a proper Austin-based singer/songwriter/movie star! There was hugging and happiness.

Thursday morning, I returned the van (waah), went for a power walk (yeah), and went for smoothies (not a fan of smoothies, but they were OK).

The New Folk Tour moved on to the Open Ears Concert Series in an uber-liberal Presbyterian Church. After an impressive chili cook-off, we set to warbling. Wow, was it fun to sing in there. Everything sounded reverby and churchified, especially when Nicolette played Marathon and Korby played Cedars of Lebanon. The Chicken Song doesn’t go over well with intense, sacred reverb, I learned.

Le Korb and I spent the night at the comfy home of David and Peggy and their Weimariners. I slept like a log and dreamed that when I woke up, Korby would be riding an old fashioned bicycle up and down the cul de sac.

Friday night’s show was another keeper: the Rice Festival in Fischer, Texas. This old, happily un-renovated, deep country, honey-look-you-can-see-right-thru-the-walls venue has been described as “performing inside of a guitar.” It’s like a mini Kerrville, complete with Dalis Allen and a field of campers across the way. Again, a transcendent time playing music on a sunny late afternoon in the Texas hill country, where the light has its way with you. 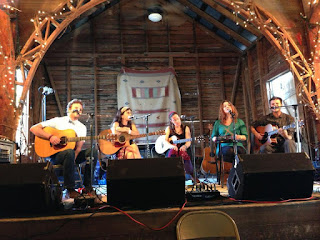 We stayed til they closed it down. Here’s us singing Cedars of Lebanon. (It'll open in youtube, maybe.)

It was 1 a.m. We drove down a series of roads and through gates, and across creeks to Stan and Chris’ ranch where the stars rained tiny little cowboy ballads upon our undeserving heads. It was sooo comfy and I crashed around 3 a.m. In the AM, I talked metal detecting with our hosts and got to see some of the stuff they’ve found around the place – just lying there on the ground. In addition to some awesome fossils, they found this.

As we packed up to go, I found myself sprinting down the path desperate to find SOMETHING.  I didn’t, but I left with an invite to return sometime. And I WILL.

Korby and I drove to Houston for a concert at the famed Rouse House. Another fabulous show, made more so by the presence of my cousin John and his dear gf, Jimmie. The Rouses really know how to put on a show: from the key-festooned guest bathroom, to the thousands of snow-globes, to the pugs (Pancho and Lefty) who tried to annihilate each other during one of my Most Serious Songs, to the amazing curried pumpkin someone brought to the potluck, to the brand-new swimming pool that I foolishly did NOT jump into fully clothed, to the two sets of songs played for smart people listening intently… it was the stuff of legend.

After a visit with J and J and meeting their lovely friends (and a rare command performance of Elton John/Whit Hill songs) I flew home on Monday, Nov. 12.

Which brings us back to MDing which, of course, is what you really wanted to know about.

This Friday after work, I plunged into a new Brush Hill yard I’d just gotten permission to hunt. Found this before stupid darkness – curse you Daylight Savings Time – sent me home: 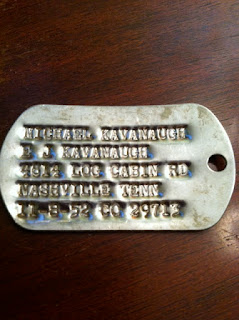 Cool find. Did some research and I think I’ve tracked Michael Kavanaugh down (on Face Book no less), so don’t bother. More to come on that.

Spent four hours on Saturday in the same yard. Here’s the best find of the day, in situ.

And here's the whole day's take, from lower left: a modern bullet, a weird thing that says TEP CO, pennies from 1925 and 1942, a Naval-looking button (not sure about it; will find out), another weird thing, an old gas cap (I think), a 1963 rabies tag, a round thing (toy steering wheel?), bullet (?), bunch of clad (modern coins). 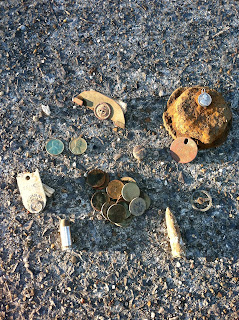 Heading back up to Michigan tomorrow for Thanksgiving with the fambly. (After last summer's automotive shenanigans, you can bet the St. Christopher medal will be tucked safely in the glove box.) Friday night, Al and I will be performing at METAL – a cool, new Ann Arbor gallery and metal furniture/art emporium. I’ll be bringing all my finds for a serious show and tell.

And I will have my Fisher F75 Limited Edition metal detector in the back of the van– as well as my Tesoro Cibola. Wanna play?