This one isn't earth-shattering, but it was instructive in some gentle ways.
A couple of days ago, I was down the street checking out my neighbors' yard. It was cold and I knew I wouldn't be out there long. Dug a few wheat pennies and the usual TUPoM (twisted, unidentifiable pieces of metal). Over by the driveway, got a good, solid signal and there, about 4 inches down, was a dog tag.
Dog tags are among my favorite things to dig; I've found 4 or 5 of them but this was the first that states the name of the dog: Babe.
It said, "I belong to Joe Corley" and gave the address -- one street over from me -- and the phone number, which only had six digits. 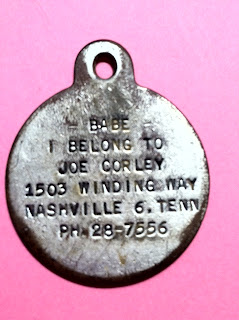 As I stood there, thinking about Babe and Joe and who they were and what kind of dog Babe was and maybe it was Joe's first dog when he was a kid and maybe Babe had gotten lost and never found his way home and there were boyish tears and grief, or maybe joyous reunification over there on Winding Way, or maybe none of that happened and maybe Babe just enjoyed a life freer than most pets today, wandering the neighborhood at will, and maybe had a pooch over here on Camellia Place he liked to visit, or maybe a little old lady who gave him bacon and maybe, maybe, maybe...
OK, I never finished that sentence.
As I stood there maybeing, wondering, the neighbor whose yard it was drove up and I showed her what I'd found in her yard. I teared up a bit for some reason, feeling the rush of connection with the past, wondering if there was a reason for it all, something I needed to do, a message to deliver.
Came home and immediately googled Joe Corley. Turns out Joe was well-known around here, a respected businessman who owned a lot of property around Gallatin Road. A really great guy. A dad. Unfortunately, I learned all this from his obituary. Joe died last October. But his son, Russ, a local minister, was easy to find so I emailed him.
A few days later, Russ drove by to pick up the tag.
I wasn't sure what to expect. Would it be emotional for him seeing Babe's name again, on a shiny circle of stainless steel that had once hung from her warm, soft dogneck, tinkling slightly as she ran through the neighborhood, catching the sunlight on bright mornings? Would it catch his throat to see his dad's name engraved in the metal?
In fact, it was a calm and cordial exchange. He looked at the tag briefly, then put it in his pocket. Babe, Russ told me, was a boxer, a really nice dog who lived to be 13 years old. She died in the early 1960s: 50 years ago. Yes, Russ and his siblings had fun growing up over there on Winding Way. There were creeks to explore.
We talked about the weather, music (he saw my guitar). He warned me to be careful on my metal detecting adventures (he'd read my blog). Then he thanked me, we shook hands, and he left.
And in the silence after the closing of the door, I felt a little foolish. Like I'd been way too invested in his reaction. As if the magic of finding Babe's tag – or what felt like magic anyway – was just something I made up. And that sensible people would have thrown that tag in a plastic box with all the other tags and not thought about it again. That sensible people never would have been out there looking for it in the first place.
Posted by whit hill at 4:13 PM