Good gracious! So much to tell.
There’s been a bit of a lull in the MD arena for me over the past couple of months – not for lack of effort, but definitely for lack of noteworthy finds. Here’s a quick recap of February before I get to the entomological, sterling silver, urban weirdness of mid-March…
The Yard That Keeps On Giving
There’s a yard near my home I’ve hunted at least a dozen times and it never disappoints. Just when I think there’s nothing left in it, it delivers afresh. One February afternoon I ran over there for a quick look-see and noticed something: a two-foot-wide strip of grass that ran between the long driveway and a tall hedge that marked the border of the next property. Could there be anything in there? There was. My first signal yielded three silver dimes (two Mercs and a Rosie) all in the same hole. There might have been a wheat penny in there too.
Further down the driveway, got a real honker of a signal and pulled out this cool, old finial (the top of a lamp, or maybe a flag). Not particularly old, but very pretty.
Then, in the back yard I found a tiny Esso sign, probably part of an old, toy gas pump. That was a good day.
West Side Delights
Through a friend of a friend, I made contact with a lovely 80s-ish couple over on the other side of town. They live in a densely populated neighborhood that is very hilly.  And, as I am learning, hills in Nashville = Civil War encampments. I had friends visiting from out of town and we drove over on a sunny but chilly afternoon for some hunting that I was pretty sure would deliver some goods. I gave Annie and Rod my tried and true Cibola to play with while I took the Tesoro DeLeon I was trying out and thinking of buying. Unfortunately, the house was right under some power lines and the frequency interference made it almost impossible for me to hunt, so I just helped them.  We dug some coins and some trash and had fun. Then, as we were getting ready to go, I grabbed the Cibola and took one more swing and pulled this out.  Looks like the mouthpiece of a small bugle or something. Love it!
Cheryl and I went back to that yard for a serious hunt about a week later and I pulled out a beautiful uniform button and a three-ringer bullet. Nice yard!
Cover Girl
At the beginning of March, I learned that not only was my OHIO (see earlier post) featured in American Digger Magazine, it was front and center on the COVER.
OK, now for more current events…
As many Dirt Girl Unleashed readers know, my husband, Al Hill, tours the world as music director for soul diva Bettye Lavette. A few months ago, the schedule revealed a choice gig: three weeks in March at the Carlyle Hotel in New York City – my hometown. These days, I am an entirely lapsed (failed) New Yorker. I just can’t do cities any more, particularly that one. Being a squeamish, tender, introverted sort, I am severely compromised by:
1.     dirt
2.     bugs
3.     globs of spittle on the sidewalk
4.     loud noises
5.     huge crowds
6.     rude salespeople
7.     lack of grass
So I mostly stay in Tennessee, preferably in the woods. But here was a chance to go to New York and stay in one of the nicest, fanciest hotels in the world AND a chance to hang out with my sweet family of origin. Not to mention a chance to try a wee spot of urban MDing. You need a permit to do anything serious and sadly Central Park (a block from the Carlyle) was completely out of bounds. But I got permission to hunt two friends’ backyards: one in Harlem and one in Brooklyn. Excitement!
Your Dirt Girl packed carefully. I disassembled the recently purchased DeLeon and crammed it into a backpack. Also packed the nicest dress I have and some lovely pleather boots.
Our room at the Carlyle was not large, but luxuriously appointed and altogether agreeable to me. See, there has been much talk of the resurgence of an insect I will call schmedbugs. These critters are apparently EVERYWHERE in New York City, to the point that people in luxury high-rise apartment buildings will throw all their fancy furniture out onto the sidewalk and post signs on the pile warning; “BEWARE! SCHMEDBUGS!” Hotels are not safe. No place is safe.
So I arrived terrified, but was instantly soothed by this lovely, spotless hotel.
Friday morning, it was off to dig in Harlem. Great to see my dear, college friend, Loi, who lives in Astor Row – one of the neighborhood’s most architecturally significant blocks. (http://en.wikipedia.org/wiki/Astor_Row)
Her yard made for hard digging though. Lots of flotsam and jetsam. But I unearthed some interesting ceramic shards and part of a 45 record.
I’d like to go back and dig every single back yard on the street. Yum. Here’s me in Harlem.
After a wonderful dinner with my family, I headed back to the hotel to see Bettye’s show. Strangely, her performance sits nicely into any story about things that are hidden and revealed. That woman digs down deep. A stellar show. Very proud of Al, who played Bobby Short's piano all night. Afterwards, the two of us communed with the spirit of the great Mr. S. by attempting to mimic his optimistic expression.

Friday night, things got weird. About 4 a.m. I woke up with a start. I could feel something crawling on me. I shook out my pjs and swiped off the (fancy, 400 thread count) sheets. “There aren’t any schmedbugs at the Carlyle,” Al mumbled in the dark. I believed him and went back to sleep. Just my ‘magination…
About an hour later, I felt something again. I slapped my hand to my ribcage and sprinted to the bathroom and turned on the light. There was a BUG on me.  Much whimpering. Al came and bore witness. We captured the varmint, still alive, and tucked him into a tiny plastic bag. Then, of course, we hit the Internet.
Guess what is NOT a good idea: looking at giant, gory, up-close photos of schmedbugs in the middle of the night. We could not decide if “Bernard” -- as we began to call our new charge -- was, in fact, of the offending breed. Tiny and evil, it looked not unlike any number of other insects. But what was it doing in my bed? At the CARLYLE?
Miraculously, we got back to sleep.
In the morning, we called the front desk and let me tell you, that was one speedy hotel manager who appeared at our door with his reassuring Swedish-seeming accent. He took Bernard downstairs. Shortly after, I overheard this phone call:
Hotel Manager: Well, sir, it’s not a schmedbug. … tell me: do you have dogs?
Al: Why, yes, we do. I mean, at home. Not in the room.
Hotel Manger: Well, sir, it’s a tick.
Al: Oh, well, then, all right. Thank you.
Click
Hotel Manager: (to entire hotel staff) Those filthy Tennessee heathens and their ticks! We haven’t had a tick at the Carlyle since 1934! Harumph!
(OK, that part I made up.)
But sure enough, when we got downstairs 15 minutes later, instead of one or two clerks behind the (shiny, marble) front desk, there were about 25 highly coiffed hoteliers, all standing in a line, staring at me and Al with frozen smiles. I can't quite remember what I did as I walked past them toward the tender mercies of the front door, but I did one of two things: a “thumbs-up” – as if to say, “whoo-hoo! Ticks rock, dude!” or I mimed wiping sweat from my brow – as if to say, “Close one, Carlyle! No schmedbugs for you today.” Whatever I did, I was horribly embarrassed and spent the next hour wondering how a tick (if it was a tick) ended up on my ribcage.
No, I’m not done. There’s more metal detecting to describe.
After a fun East Village lunch with meta-cool young blogger Royal Young, Al and I headed out to Brooklyn to reconnect with old Ann Arbor friends Esther and Alan. They have a dog named Molly -- rescued from a bad situation in East Nashville and now living the good life in Brooklyn. Here's Molly communing with the spirit of Bobby Short by attempting to mimic his optimistic expression: 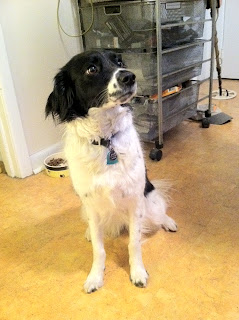 After hugs and kisses and chit chat, I headed out back to have my way with their yard. It was really pretty out there, but there were problems: I had to dodge lots of valuable underground plants plus there were big, fat power lines above playing havoc with my signals. So it was slow going. BUT I found this sterling silver fork (?) handle! 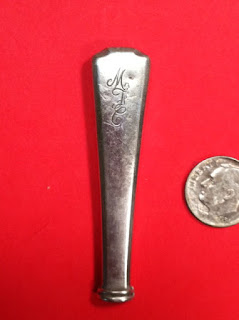 I really, really love it. Wonder who “M.F.C.”  was…
Here’s me in Brooklyn, right before I stepped in doggie diarrhea which put an end to my hunt.
Sunday I didn’t dig at all. Sang songs and read from Not About Madonna at the Rockwood Music Hall on Allen Street and saw lots of old friends. Much fun. And Monday, back to Tennessee.
On the plane, I thought about the tick. First of all, yes, I have dogs. One of them is irritating me as I type this. But I have never seen a tick on them, nor have I ever seen a tick in my house. Plus, the hotel manager’s insinuation irked me: what, they don’t have ticks in Manhattan? Central Park, lovely as it is in the springtime, has to be crawling with them. I walked through the park once during my trip, but stayed on the paths. I didn't roll around on the ground, I promise.
In the end, I'll never know how it happened, but I prefer to think that my metal detecting gear was the portal. That while digging Civil War relics in deep Tennessee woods, a few days before my trip, Ticky McTickerson fell into my fanny pack, flew Delta to New York City, then crawled into bed at the Carlyle Hotel.
“Aah,” he thought. “Now we’re talkin’.”
Posted by whit hill at 10:59 PM