My four days in NYC led to a week of lovely, self-imposed hermitude. Al is gone, Sam is gone… it’s just me and the dogs and the splendid weather: an excellent combination. I’ve been going back to hunt The Eterna-Yard throughout the week. Found another old buckle and a whole bunch more wheat pennies from the ‘40s and ‘50s. Also one silver Rosie dime. I actually feel like I am having a relationship with that yard… like we’re seeing each other. Hanging out. Hooking up.
Today, Sunday, I drove about 50 minutes deep into the countryside to meet up with Doug, Cheryl and Brenda. For the record, I love my IPhone and those killer map apps. Just astounding.
I pulled up behind them at a gate at the end of a long dirt road after having passed flocks of chickens, roosters, guinea hens and a bunch of cows enjoying a cooling dip in the pond on this beautiful, hot day. Beyond the gate was a large river. Doug’s research had led him to believe that there was a ferry landing and a town here, many years ago. The town had been burned in the war. We walked around and did some half-hearted MDing. He found a minie ball, but no one else found anything. I, myself, was nearly sucked down into the core of the planet by evil river mud/quicksand, but I got free due to my strength and determination.
We had a really nice chat with the owners of this magnificent property. The man’s family had lived on this land for five generations. But he didn’t think the landing was here; he gave us directions to another road, just a mile or so away.
Here, the road just ran down into the river. It was definitely a landing, or had been. Nearby, though, Doug had noticed lots of buttercups: a sure sign of an old homestead. Was this the town?
(A side note: I maintain that the flowers in question are daffodils and that daffodils and buttercups are not the same. The parties involved were unable to come to an agreement on this.)
We parked next to the… flowers… and dived into the woods which were thick, but doable.  I was immediately visited by numerous friends and relations of Ticky McTickerson (see previous post) wanting to know his whereabouts. I told them he was still in New York, at the Carlyle, and would not be returning. Then I killed them.
As so often happens, my first signal was my best find of the day: a beautiful brass buckle. 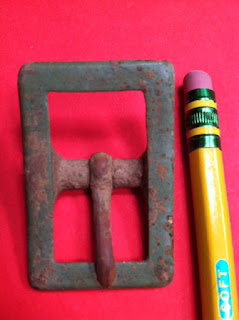 We also dug a lot of big pieces of lead. Found a large cistern, still filled with water (extremely creepy, as in likely-place-to-hide-the-body…)
We all were very excited about this spot and will return. We are confident that there are some CW hotspots nearby. We just haven’t found them yet.  There is also the scenic beauty factor to consider: oh-so pretty. I wanted to be an Native American maiden with braids and SO BAD. Looking at beauty like that makes you want to simplify your life.
I got back to Nashville by about 3:30 and walked and fed the citizens, then, since there was still valuable daylight just hanging around in the sky doing nothing, I headed out to a vacant lot nearby that I’d been given permission to hunt. Very disappointing: rocky soil that was hard to dig, pesky power lines and nothing but trash.
I was aware that people in this (very exclusive, tucked-away) neighborhood were checking me out and soon a car pulled up and the couple inside asked me if I had permission to be there. I did, but I had unwittingly crossed over into non-permission regions. They were nice about it though and I appreciated that. I left soon after.
The only thing I came away with was a Mercury dime.
When I got home, I cleaned it off: 1939. That was so long ago.
A few minutes later, I got a phone call from Ann Arbor. Al flew there from NYC today to celebrate his mom’s 97th birthday. (I was just there a couple of weeks ago and decided not to go.)
Everyone was there, around the Hill family dining table. I could hear the hilarity, the clinking of cutlery. Helen got on the line, said she missed me. I love her so. She has been such a wonderful mother to this motherless girl. (Her own mother died in the 1918 flu epidemic, when she was only three, so we have a sad bond).
“Helen,” I said, “how old were you in 1939?”
She thought for a second. “I was 24. That was the year I drove out west and camped for the summer in California.”
When she got back, she said, she had a telegram waiting for her from the University of Illinois offering her a position teaching English.
“It was also the year the war started,” she continued. “That was in September and everyone was on edge….” She paused. “When I got to Illinois, I saw this tall, dark, handsome man in the halls. He didn’t notice me much, but I noticed him! And eventually, he noticed me…”
“Helen, I’m so glad you got that telegram and went to the University of Illinois and noticed that tall, dark, handsome man,” I said. “If you hadn’t, my life would be so different now.”
“So would mine!” she laughed.
“So 1939 was a very important year, wasn’t it?” I asked.
“It was. It was a very important year.” 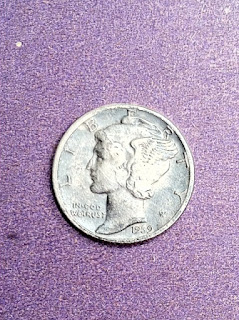