I knew it was coming but… damn.

Last Sunday (January 12, 2014), Cheryl and I went to visit Doug in the hospital. After about a year of increased breathlessness and weakness, a quintuple bypass that never quite accomplished anything, a spot of lung cancer and a boatload of radiation, Doug decided he’d had enough of hospitals and went the hospice route. They were fine-tuning his oxygen levels before sending him home to his cozy and comfortable house.

We didn’t know what to expect when we walked in his room. He was lying in bed, staring at the clock on the wall.

Sick as he was, Doug lit up when he saw us and we talked and talked. I think he must have known this would be our last visit and he wanted to be sure we knew of every site he had stocked away in his massive mental archive of Sites to Dig. Names, roads, towns, stories… Cheryl took notes furiously. We wracked our minds trying to remember the questions we had for him. It was wonderful to see him so engaged and so much himself: lucid, opinionated, funny, acerbic, generous. He told us, laughing, that the oxygen he was on sometimes made him dream he was flying a fighter jet.

I showed him a shiny, lacquered horseshoe – my first experiment with electrolysis – and when he said it looked great, I was so proud. Somehow, as old and Cheryl and I are, we felt like kids around him and basked in his approval and excitement.

As best we can recollect, Cheryl and I first met Doug Drake in November of 2011. Novice detectorists, the two of us had been heading out together nearly every weekend not really knowing what we were doing or where the good spots were. We spent a lot of money on gas in order to dig a lot of junk, but it sure was fun.

The full story of our first meeting is described in an early Dirt Girl post, “Triune”. But the short version is that Cheryl and I had arrived at a site we’d heard about, staring at a huge NO TRESPASSING sign, when a big, brown Crown Victoria pulled up beside us and a tall, 70-something guy in overalls got out.

He had the twinkliest eyes ever, made even twinklier (I like to think now, looking back) at the sight of two disappointed middle-aged ladies with detectors.

Doug Drake to the rescue. He told us to follow him and we did. About ¼ mile away, he rolled down his window and pointed to a dirt road; then he sped off.

It was a great site and I found my first (and only) truly valuable (not to mention amazing) Civil War relic. About a week later, I went over to Doug’s house to show him my finds from the past nine months. He looked them over carefully, then looked up at me and grinned and said, “I want to go metal detecting with YOU!”

From then on, we were a three-man detecting team. Because Doug was retired and Cheryl between jobs, they went digging several times a week, while I joined them on the weekends. We learned so much from him. So many times, when I dug an unidentifiable item, I’d think, “I’ll show it to Doug; he’ll know.” And he usually did.

But sometimes he’d turn the item over and over in his hands, so studiously, then look up and pronounce, “Hmm. It’s just one of them there thangs.”

Born in 1936, Doug was a member of the fifth generation of Drakes who had settled the Madison area in the 1700s. He was a born historian, a man with an intense and coursing curiosity, and not quite of this era. Today, at the visitation, his sister told me that he used to sit out in the field behind their house, just sit there, staring at the land, ignoring his mother as she called for him. As a boy, he hunted for arrowheads, then became fascinated with caves. He began using a metal detector 50 years ago and had an encyclopedic understanding of the history of middle Tennessee. On our dozens of road trips in that swaying brown Crown Victoria, (with me battling motion sickness), he pointed out hundreds of sites he’d dug years ago. Cheryl and I tried to remember them all, but it was just too much.

He and his wife, the gentle, lovely Brenda, whom he married in the early 1980s, explored farmers’ fields and deep woods and – on their own – discovered the locations of several pioneer forts then shared the information so the sites could be properly documented by archaeologists. Doug donated hundreds of items he dug to local museums and historical societies.

About a year ago, we noticed that Doug was having to stop digging and sit down a lot. 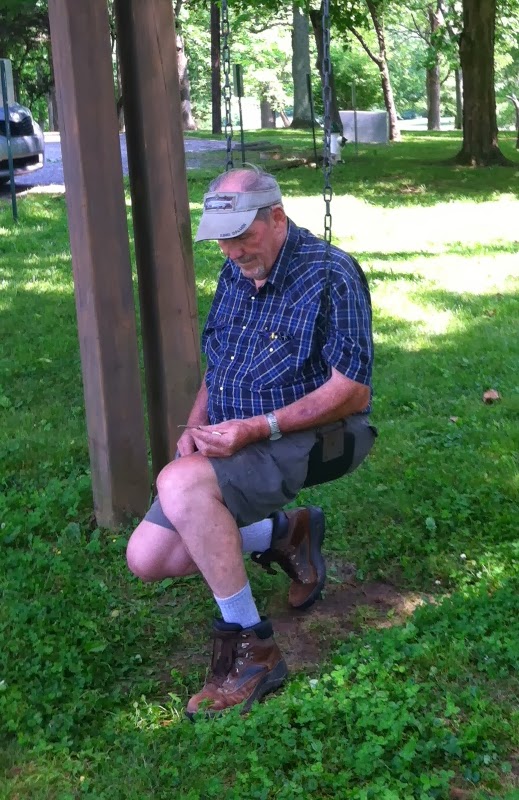 The long hikes back to our cars really seemed to take it out of him.  It wasn’t like him at all; we tried not to worry but as the year progressed, he came digging with us less and less frequently.

One day, though, he felt better and he and Cheryl met up south of town. After a few hours of fruitless digging, she came upon Doug leaning against a tree, grinning from ear to ear, with a rare Confederate button he'd just dug.

In April, my dear friend, Terri Sarris, a film and video artist at the University of Michigan, came down to Nashville to shoot footage for a short film about me and my metal detecting life. It hasn’t been edited yet, but I have a strong feeling that a lengthy interview with Doug, seated in the doorway of an ancient smokehouse, in a Tennessee holler, will be a highlight of the finished piece.

Doug's bypass took place over the summer and he never really recovered from it. Then an xray revealed the spot on his lung. To me and Cheryl, at least, he seemed quite unsentimental about it all. Sometimes, he came to a site with us and just set up a stool and watched us dig, his oxygen tank in the grass beside him. As the weather turned cool, he began selling and giving away his finds, his detectors, his bottles, his books, his maps.

(In the video above, Doug takes a break from selling his bottles to recall an amazing site...)

After about an hour, we could tell Doug was getting tired so we wrapped up the visit. I patted his arm, but Cheryl said, “Doug, I know you don't like to be hugged but I’m going to hug you anyway.” And she did. We really thought we’d be able to visit again once he got home.

Tuesday, an ambulance brought Doug home and set him up comfortably in his chair. The hospice nurse left. Brenda puttered around for a bit, then checked on Doug. He was gone.

In the midst of life… yup. Sigh.

The visitation this morning at the Madison Funeral Home was filled with folks from throughout Doug’s life, laughing and talking and crying and thinking. Then, we went outside into the cold, January gray, we got in our cars, turned on our flashers, and headed downtown with a full police escort.

I’d never driven in a funeral procession before. Here in the south, it means that all traffic stops as you pass by. Police cars speed past you to block the intersections as you sail through red lights. It was pretty impressive and I felt strangely proud that all these strangers were stopping to honor my digging buddy without even knowing who he was.  (Some of these Southern rituals – like children saying “Thank you, ma’am; I enjoyed it” when they leave the dinner table, and stopping traffic to honor the dead – are worthy and good.)

We drove to the Nashville City Cemetery where the Drake family plot was purchased in the 1830s by Doug’s great- great-grandfather, Henry Hollingsworth, who was then the mayor of Nashville. The line of cars drove slowly between the ancient stones and past huge, old trees. We stood, shivering, under a small canopy, where the casket lay draped in an American flag. (Doug served his country in the Tennessee National Guard and in the United States Air Force as a young man.)

A young soldier stood some distance away, under a tree, and played taps, so sweetly. (That’ll make you weep for a tough old digger any time.) Two other soldiers folded the flag and presented it to Brenda.  We sang Amazing Grace. A minister said a few words. The pallbearers placed their corsages on the coffin, then Arthur, another of Doug’s digging pals, added a bullet.

And it was over.

Cheryl and I went to a meat ‘n’ three, because funerals make me hungry like nothing else.

It’s just one of them thangs... 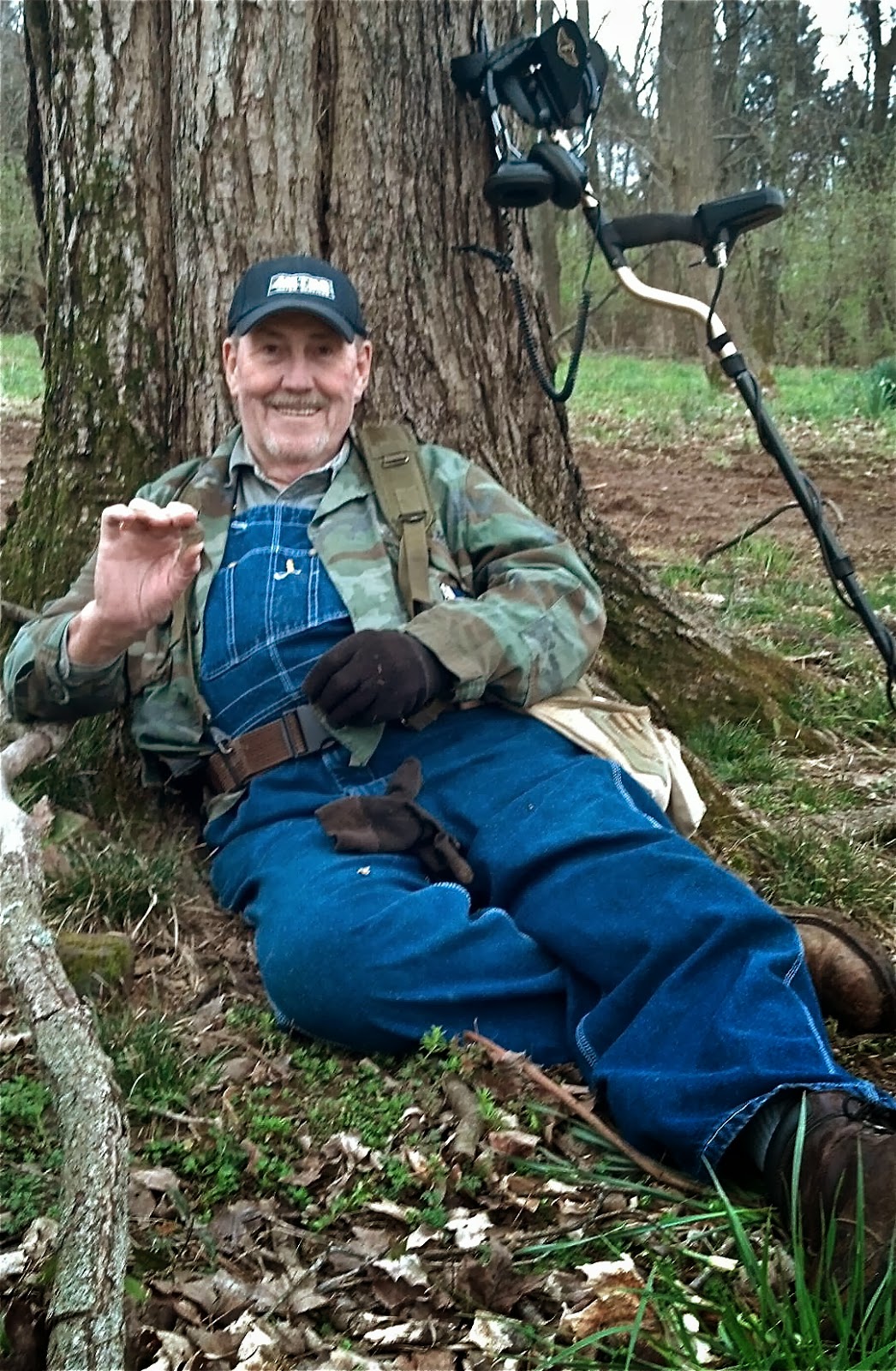