It’s not often – well, it’s never – that I post twice in one week but I got something to say.

About a dog I never knew.

Thanks to some generous, tolerant and perhaps slightly curious neighbors, I now have permission to explore two more beautiful Brush Hill lawns. A couple of days ago, after work, I took advantage of the sweetly lengthening days to mosey on over and get the lay of the land.

Lawn number one is massive, dotted with the ubiquitous hackberry trees and an oak that the homeowner reckons to be about 135 years old. On the other side of the house is a bluff high over the Cumberland. The homeowner is as geeked as I am about finding the Lost Village of Haysborough. He’s way too busy to do the actual hunting, but I’m hoping he can help with contacts and access.

After wandering rather aimlessly around for an hour, I pulled out an old dog tag (for dog, not soldier). Couldn’t read it, but I’m always happy to dig dog tags. I kind of feel the dog nearby.

Then, not far from there, I pulled out a really large coin. Very excited. Large coins are usually OLD and since I was in an area where I’ve dug quite a few colonial-era items, I was pretty sure that was what I had.

Back home, though, it revealed itself to be a 1940 English penny. OK.

My attention turned to the dog tag. I cleaned it off and there, in my hand, was a man and his dog. 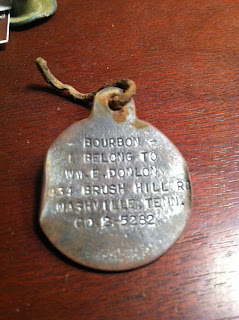 It didn’t take long to track down William E. Donlon, who, sadly, died in 2009. I found his obit online and soon learned he had a daughter, Mary Lee, in Brentwood. I tracked down her email and shot her a message. I had Bourbon’s dog tag. Would she like it?

Now, from my experience with “Babe,” (see Babe post from last year), I learned that not everyone shares my thrumming thrill of dog tag recovery but Mary Lee did. Within an hour, I received this:

"Whit: Thank you SO much for the email. Bourbon was our Boxer when we grew up on Brush Hill Road. We lived there from 1952-1979. Wm E Donlon was my dad. I would really love to have the dog tag as a memento. My husband does metal detecting all the time & also tries to return things that he can to their owners. I really appreciate your taking the time to contact me. My family will be thrilled! Thank you again!”

Well, that made me feel good. Mary Lee contacted her siblings who were equally excited. They started looking for photos of Bourbon. (As soon as they send them, I will post.)

“My parents owned a large utility construction company,” continued Mary Lee. “They installed all of the sewer/water lines for the Early Times Distillery in KY. The owners of Early Times raised boxers & gave our family a puppy; hence the name 'Bourbon' after Early Times!”

We made plans to meet on Brush Hill Road on Saturday afternoon.

After a fun mid-day gig at Antique Archaeology (the American Pickers store, here in Nashville), I scurried home and deglammed myself (because your Dirt Girl becomes glamorous when she performs, or at least wears eye liner.) Then I headed out.

Mary Lee and her husband, Milton, were just lovely, lovely, lovely. We had a good visit. They’d brought their Schnauzer, Buddy. Turns out, Milton has been an avid MDer since the mid-1970s and he brought his amazing button collection to show me. Wow. 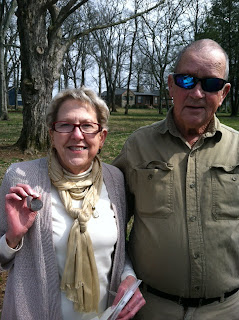 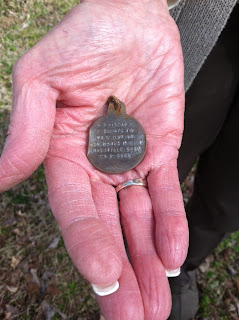 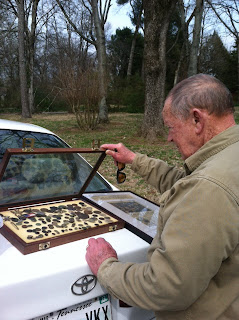 I learned more about Bourbon. Everyone in the neighborhood had dogs back then, Mary Lee explained, and they all ran free.

“And there probably wasn’t any fighting, right?” I asked, assuming that back when dogs were allowed to be dogs and run around and sniff things and interact with other dogs, peace reigned throughout the land.

But it wasn’t quite like that. Once, Mary Lee told me, Bourbon got into a terrible fight with a neighbor’s German shepherd. No one could break it up. Then, Mary Lee’s big brother came up and punched the shepherd in the head. When it was all over, Bourbon was fine, the German shepherd was dead (“He must have hit him in just the right place and it killed him,” she said, still disbelieving after 50 years) – and her brother’s arm was broken.

We stood on the side of the road for about 30 minutes, talking about dogs and kids and growing up. Mary Lee had never heard of the Lost Village of Haysborough, much less come across it during her childhood ramblings.

They gave me a bottle of wine, which was totally unnecessary but much appreciated. 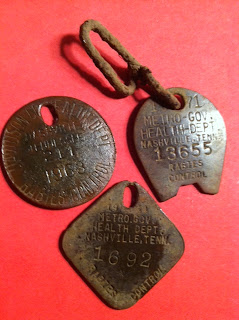 It was as if the long-gone pack had been called together for one last romp on the bluff. 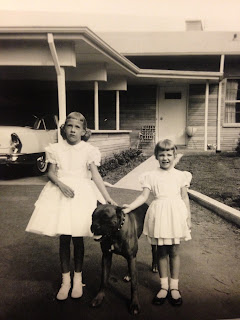