I was going to talk about trash, since that's mostly what I dig. But this weekend's hunts uncovered a different sort of refuse and I kind of fell in love with it.
Saturday I was on my own, right here in Inglewood. Drove over to the next street where my mailbox flyers (“Hello! I'm a crazy lady! Can I come metal detect your property?”) had resulted in permission to hunt two huge yards owned by a very nice woman and her sister-in-law. I'll be working on these yards for a good while; they're that big.
Started out in back, where the owner said her son had lost his high school ring about 40 years ago. I was very excited about this until she mentioned that they were pretty sure they'd built a garage over the area where he lost it. I checked the entire perimeter of the garage, but only got triangular snippets of aluminum siding, which I hate with an almost terrifying rabidity.
The owner's great-granddaughter, a very self-possessed young lady, came out to help me and I found myself begrudgingly handing over a couple of old toys and interesting iron thingies I dug up. She really was quite persuasive, with her little bangs and fashionable attire. Apparently, this child does commercials and I can see why. I was about to give her my Tesoro Cibola and just go home. (She actually was very helpful and polite, holding my shovel and all. I do love digging with kids.)
Then I dug this.
Ooh, she said, I think I'm keeping that!
Hmmm. I said. Now, let's talk about it. What are you going to DO with it? Won't it just sit in a box in your room?
(My internal monologue: It's MY JUNIOR SHERIFF BADGE! MINE! GIVE IT! MOMMMM!)
Luckily for all involved, the young lady saw my logic. Soon after, she got cold and went back inside. I spent a long time excavating a very deep hole. Dang, it was deep. Found a lot of burned wood in the bottom. I think it was a campfire or something. Very strong signal tho: the lid of some kind of large can. And, as so often happens, I filled the hole while muttering, What Am I Doing Out Here?
Dug a lipstick and a penny and went home, sore and grumpy.
Sunday, Cheryl was fighting a cold, so Doug and I headed out to dig. Destination: downtown Nashville,  an area behind the new convention center. The lot was maybe an acre and had just been bulldozed: dark, dark mud, filled with broken pavement and bricks. There was another guy there detecting but I didn't mind. Actually, this was my first experience of urban construction-zone detecting and I was glad for the company. For the record, I would never have done this alone.
The first thing I noticed, as we started sweeping the area with our detectors was that there, in the gross, sticky, asphalty mud, were thousands of pieces of crockery. Flowers, colors, beautiful glazes, graceful shapes. It was like being at the beach, picking up shells. I couldn't stop myself.
Here's a sampling.
Oh! I've forgotten to mention the bottles! I'm not a bottle collector, but that could change. I couldn't just leave them there...
Metal-wise, I didn't do very well. I was trying out a new machine that I didn't know how to use and it was on fire, with constant signals. When I thought I had a good one, I found I just couldn't dig with my usual Home Depot mini-shovel. I needed more of a pitchfork approach in this stuff. In truth, I just wasn't physically strong enough to hunt this site. The only real “find” was a corroded metal disk. I've been cleaning it ever since I got home and it appears to be a token from the Sam Davis Hotel, which was on or near this spot and was torn down in 1985. Sadly, it's too cruddy to photograph well.
This... 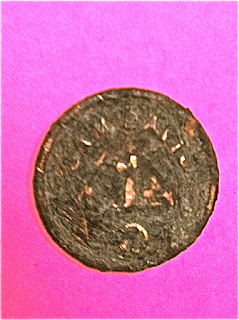 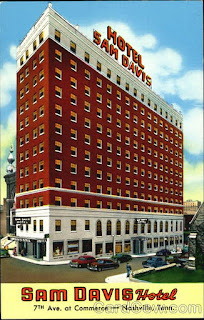 An hour later, Doug and I found ourselves way east of town at an early 1800s home site about to be gobbled up by a subdivision. The grass was so tall it was hard to swing the machine, but I managed to bag the leg of an old, cast iron stove which looks suspiciously like a leg of lamb. (I'm fairly sure it had been dug by a previous metal hunter and left there for me. I personally think it will make a fine.... wall hanging?) 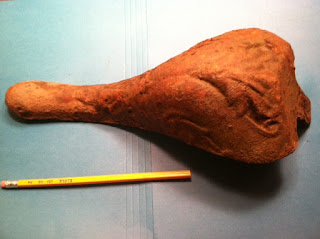 Doug pulled out a beautiful, old door hinge. I got a mason jar lid. Tired, we stood there and just looked around. We could see nothing but trees, hills and brambles, but the sound of thousands of cars and trucks just over the next ridge and plane after plane coming into BNA – not to mention a huge mountain of bulldozed earth next to us – were a reminder that the sweet wildness of this place would soon be gone.
Posted by whit hill at 9:49 PM